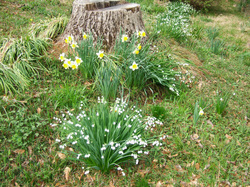 The stump is all that's left of the wonderful tall tulip poplar that I had to have taken down when another old tree just across the fence had fallen into it, pushing it toward my house. Hated to see it go, but would have hated to see it cut my house in two as well. I left the stump: it too is useful as a bird feeder.

You can see to the left a bunch of bulbs that got seriously hurt by their coming out before this very long winter's freezes were over. 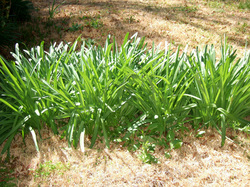 One of the plants that burgeon in the spring that I love is the naked lady (or as we would call it down here, nekkid lady). No, not the bloom. That comes in July or August, after a good rain, when suddenly these tall spikes topped with a pink bloom shoot up out of the ground, seemingly overnight. My mother of course called them by their more proper name, pink ladies, because of their color. It happens to be a pink that I really don't like. What we have now is the dark green foliage in masses nearly 2 feet high, and to me it is beautiful. I think the darkness of the green is unexpected this time of year, when so much of the new growth is a much lighter green.
Here we are on the 3rd day of April. Spring in Alabama, as in most of the United States, took its own precious time in arriving this year. And now that it is here, it seems to be rushing by. 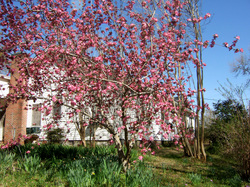 Same tree, same day, looking back toward the southeast corner of my house. That corner bedroom was mine when I was a child. When I moved back to Alabama, I decided that it would be a good idea to have a different relationship to the house, and I took the next bedroom down the hall, the one that used to be my sister's. That rear bedroom was Tom's for the last 18 years of his life. He loved looking out the south and east windows at the yard and the woods.

Now I tend to alternate, on no particular schedule, between the two bedrooms. 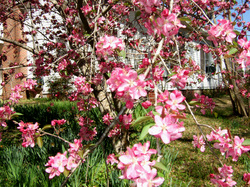 That chimney to the fireplace on the back porch den is no longer used. About 15 years ago I began to doubt the safety of that chimney, and in addition I had gotten tired of maintaining a supply of cut wood to burn therein. Also we had begun to spend most of our evening time in the living room up front, and why have a fire when you're not there to enjoy it. Actually, the house is warmer without the use of the fireplace. 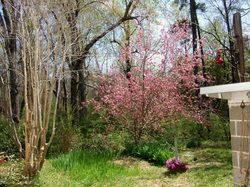 The crepe myrtle behind the rear bedroom, the crabapple, the row of naked lady greenery, the pot of Thrift, and the corner of my well house. That red light on the post is not for advertising purposes: it was a heat lamp that burned out many years ago, and I screwed it into the lamp socket just to keep the moisture out (long story). During the colder winter months I keep a heat lamp on in the well house to keep the pump and pipes from freezing.

The patch of green between the crepe myrtle and the Thrift is my bed of Dutch iris. In a few weeks  the small blue blooms will appear. 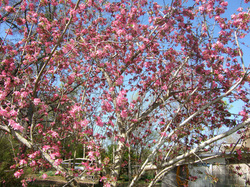 Well house, side view. Behind the small door you see  is the drilled well with its submersible pump and the water tank. I have my own water supply, which works fine except during power outages, when I must rely on my emergency water supply (kept in old Gallo wine jugs in my den). Friends have tried to convince me to get a gas-powered generator, but the expense and the nuisance (and the dread of theft) dissuade me.  The longest I have been without power is about 4 days, and I can endure that.

The well was drilled by my mother's middle brother, Jimmy. It replaced the earlier open well that had been dug by her father, King David (generally known as Dave or Mr. Dave). I can barely remember when our water came from the ground via the old hand-operated iron pump. 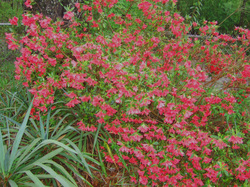 That yucca in the corner of this shot of the red azalea gave Roscoe the occasional surprise when he lifted a leg, but Huck before him, being a girl, never had that problem. 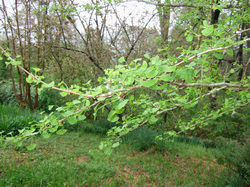 The gingko, with just a few tiny green leaves showing a week ago, is now leafing out nicely. But note the flowering crabapple beyond: only a few straggly petals left of the riot of pink of that earlier day. Most of the daffodils and narcissus are no longer blooming. 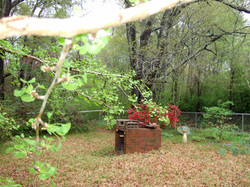 Looking back toward the southwest corner of the yard. The old barbecue pit was a fixture of my childhood. A metal plate a few inches down supported the source of heat (for us, mostly wood, although occasionally charcoal), and above that an iron grid provided a support for the big frying pan. I do not recall the pit ever being used for barbecue. For us, it was a place to fry catfish and hushpuppies outdoors. My mother's helper, Viana Rutley, usually did the frying. Two big tables (like the one now down in the woods) each provided seating for about 8 people, with the overflow sitting around card tables brought out or simply in lawn chairs with their plates in their laps. There would also be deviled eggs, potato salad, coleslaw, sliced tomatoes, and of course light bread (as we called sliced white bread in those days down here). Homemade pickles and relishes. Bottles of catsup and jars of mayonnaise. And at the end, Viana's apple pies, probably the best apple pies ever cooked, and usually homemade (and if I had my choice, vanilla) ice cream. It was, let me tell you, fine dining! How I'd love to be able to experience that again! Where are the fish fries of yesteryear! 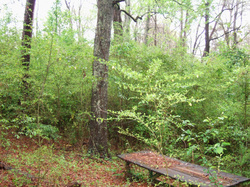 Here's that remaining table down in the woods as it looks today. If you have explored the HUCK chapters, you have seen this table covered with goats. I remain amazed that this table is still standing and has not been crushed by a falling limb or tree. 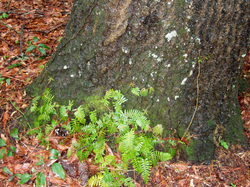 That patch of fungus on the tree above has been there as long as I have been back in Alabama, some 25 years now. It will probably still be there when I am gone.

A few spring ferns are starting to emerge. 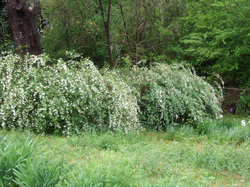 The row of bridal wreath running down the east hillside from the front of my house is hanging low because of the rains, and some of the petals were beaten off by the raindrops. Although this was taken outside the house, this is the view I have from where I am sitting at my computer in my office. 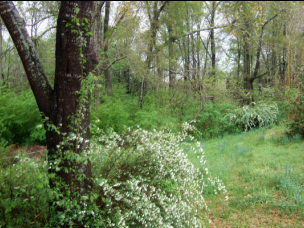 This oak tree growing amidst the bush at the top of the hill volunteered, and I decided I wanted the tree instead of the bridal wreath. For years I tried to cut away the flowering plant. It outran my best (or worst) efforts. Now it is the healthiest bush in the yard. I wish I had cut down the oak: I had no idea it would grow so much and so fast and loom over the main power line to my house.

In the distance, beyond the camellia, is the line of bushes that used to run down from the rear of the house. Now the rear back bedroom, where I usually sleep these days, extends beyond that. My mother had planted row after row of daffodils and iris on his hillside, and in the old days this slope was a gorgeous sight to see. 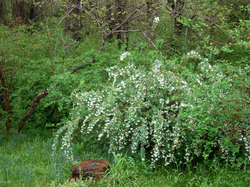 This shot of the bush at the top of that rear row really shows how low the branches hang after a rain. That stump you see was once a popcorn tree, beautiful all year round and especially in the fall. But it too leaned to the west because of the tall trees in the woods to the east, and it had begun to pose a serious threat not only to my power line but also to the satellite dish by which my computer connects with the outside world.

The popcorn tree is not a native species and is highly aggressive. It can take over whatever portion of the universe is left after kudzu and wisteria. Years later after I had it taken down I still get volunteer plants coming up from the old root system. So far I am the winner in this particular ongoing battle.