SPRING Part 2
Actually, I don't have any cherry, but I'll bet in Housman had grown up in Alabama he might well have considered the dogwood! 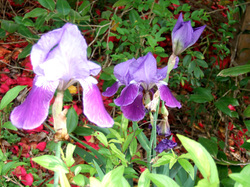 The purple iris are finally blooming. They follow the white ones by a week or 10 days, and my old-fashioned white ones are almost gone. 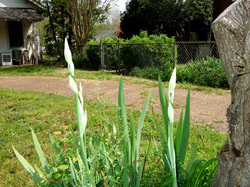 But I have these fancy large white ones to look forward to! They keep on coming back beside the old Bradford pear stump between my driveway and the county road. The blooms when they open are so large and so heavy that they should be staked. But I don't do that. Maybe soon I'll have some pictures of these in full bloom. 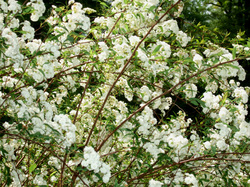 I didn't do a thing to the bridal wreath last year. I wonder if that's why it has done so well this spring. 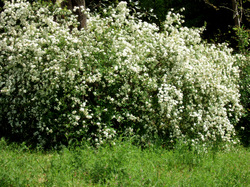 Of course, I'd be just as happy not to have that vetch growing all over the east hillside straight down from the house. It pulls up easily, but I don't generally take the time and make the effort. Oh well, in a few weeks, when the bulb foliage has begun to die down a bit, I can just mow the whole hillside. 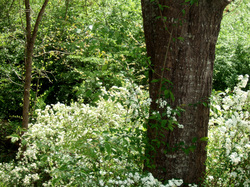 The old goat pasture across the fence is thick with privet. During my first decade and more after my move back to the old home, it was a meadow cropped close by the four goats. I miss the goats, and I miss the meadow, but I have now become fond of the thick privet growth. I wonder what wildlife hides in there. The red fox who showed up, I hope, although I have seen him only the one time. Rabbits, raccoons, possums. And it does provide the smaller birds with a place to hide from the hawks.
Here are a few shots of one of the blooms on that fancy white iris that was just a bud the last time I was taking photos. As I said, I should stake these, but I don't. They fall over and twist toward the sun. 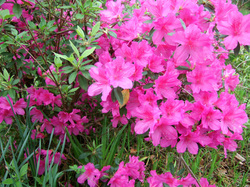 The azaleas are still doing well. This bush is on the east side of my house. 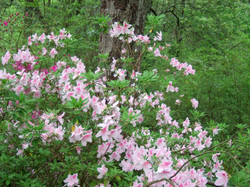 I really do need to trim up this pink one down in the southeast corner of the yard. This is taken from just inside  the yard  looking down at the dead oak tree trunk down from the corner of the fence in the old goat pasture. The leaves down in the woods are much more abundant now.  That old dead oak? If such dead tree trunks don't threaten, I leave them standing. The woodpeckers in particular like them. Time will bring them down. (That suggests a poetic observation but I will exercise restraint.) You can see how this azalea, now that I have no goats, is escaping down into the woods. Not that I have any complaints. 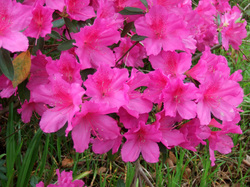 Let's take one more look at  the dark pink azalea.

Maybe this one will be like so many storms around here and will go up the interstate to the west of me. Morning newscasts seem to suggest that as a possibility. Certainly if I lived in the northwest corner of the state I'd be even more worried. 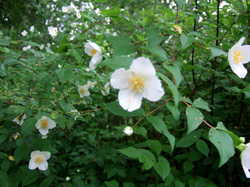 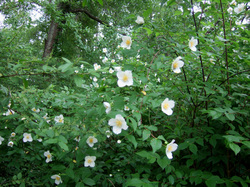 I'm grateful for the English dogwood, for the azaleas are pretty much done by now. There are a few straggling blooms on some of the bushes, but for the most part we are in that stage of dead brown bloom. Some folks get out with rakes to pull those off. Not worth the effort, if you ask me. 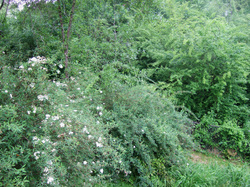 The bridal wreath is way past its prime. The winds tonight will probably take these remaining blossoms off. 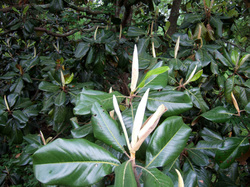 I wonder what the winds will do to the magnolia buds. There are lots on the tree, and if they survive* I should be able to show you pictures of them before long.

* and if I survive 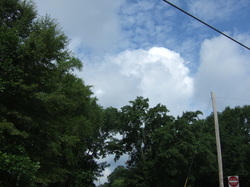 But we have learned to take our spring storms and the possible accompanying tornadoes seriously down here. It was 3 years ago yesterday that Alabama suffered its most damaging tornado outbreak ever. Two people lost their lives about a quarter of a mile west of me, two more about 3 miles northeast of me, and two more where that tornado crossed Highway 69 maybe 7 miles north of Greensboro. Hale County would have been big news stormwise except for the fact that so many more were killed in Tuscaloosa and Birmingham and elsewhere in the state that day. It was a frightening day. In skipping about from TV station to station following the storm heading for Tuscaloosa I had failed to catch the alert about the one heading for me. I didn't know it was on the way until I heard the roar. And did I run for cover? Nope. I ran out back to see what was happening. Although I could not see the funnel as it passed to the north of me, I was amazed to see how all the trees north of downtown Sawyerville were whipping about. And yes, it does sound like a freight train screaming through.

That day, by some miracle I managed to keep power during the storm itself (although it did go off for about an hour after midnight), and I was able to follow events on my television. I don't have a generator, but I do keep an emergency water supply and I have a battery-operated Walkman. Alabama Power Company is noted for charging high rates to customers, but I must say they do a great job in getting us supplied after storms. The longest I've been without power was 3 days, following a hurricane in the early 1990s. Usually an outage has been remedied in 3 to 4 hours. I don't have a storm shelter or basement either, but there is one closet on the east side of the house that backs up against an unused brick chimney, and maybe that would be a somewhat safe shelter during a minor tornado. But a direct hit from one of the present-day big ones? Probably not. One does grow a little fatalistic in one's more mature years.

This bush below is in bloom now. Dootsie. That's how I heard it as a child, and I'll bet that is how my mother spelled it. Deutzia is the correct spelling. A good friend recently asked me where I learned the names of so many plants. From my mother and her 2 sisters, and they from their mother and all their aunts from down in Lower Peach Tree, Alabama. (There once was a Peach Tree, but it got blown away in a tornado more than a century ago.) I know that most of the plants have better names, and certainly all have their Latinate monikers for when they are being fancy, but I still get a kick out of the old-timey names I learned as a child. So dootsie it is for me, and dootsie it will remain every time I see it in the late spring. 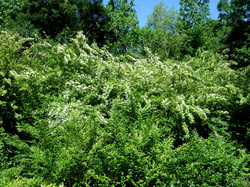 More white! The privet across the fence in the woods is in full bloom now. Some folks are terribly allergic to this, but I think I am not. I have had a major allergy attack lately, beginning with Easter afternoon on the screened-in porch down on the May Farm. I think some tree in profusion there that I don't have in my own woods overwhelmed me. I suspect it was some unusual variety of oak. I'm over the allergy attack, but not the deafness caused by the opportunistic infection that set in. 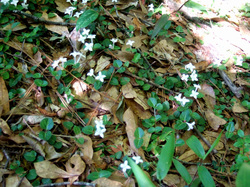 And these tiny white flowers. I don't know what to call them, and I'm to lazy to research it at the moment. If you know, you can always tell me. I have a small patch down near the back gate into the woods. 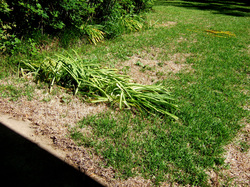 The greenery of the naked ladies is dying back now. I like it when it is fresh, but it really looks ugly at this stage. I'll be mowing over this growth after it has died back a bit more.

My poor grass! So many patches where I'm not sure it will ever come back. Stress from too many hot, dry summers and the past winter's extended cold, I suspect. 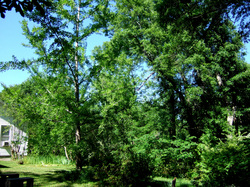 The gingko is as filled with leaves as it will get. Doesn't look like much in the spring and summer. It will come into its own when its brilliant yellow leaves accent the area in the fall. (Luckily it is a male plant and doesn't drop the smelly fruit that the female does. Still, I have been informed that they can change sex.)