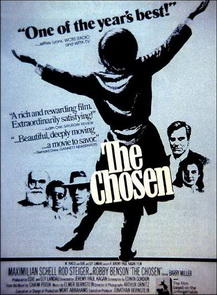 Fiddler on the Roof, Part 2? Well, not quite. Neither in subject matter nor in accomplishment. Fiddler (at least on stage) was great. The Chosen was merely pretty good. Still, Pretty good is nice!

At the time of production, it was thought that the movie would have a one-time showing with really high ticket prices at Radio City Music Hall. It did, and Tom was seriously pissed that he was not given a free pass. But that would have taken up one of those pricey seats! Instead, Tom and I got preview tickets to Lena Horne's great one-woman show. It was absolutely fabulous, more so than the official premiere which we also attended a few days later. Perhaps that first night Ms. Horne was aware of Mike Nichols and Candace Bergin and Mr. and Mrs. Gregory Peck being in the audience.

I think I like this shot of Tom on set because it shows him standing in the background watching, and that is what he did almost constantly on the job. Among other things, having to write production notes before the film was finished,  reading the screenplay and then watching the scenes being photographed was his only way to figure out how to slant his material. 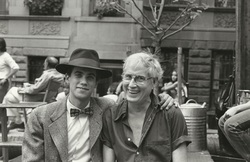 Tom and actor Robby Benson quickly bonded. Benson was easy to get along with, easy to work with, incredibly cooperative. As you can tell from the costume above, he played the Jewish boy from a more conservative background, son of a rabbi played by Rod Steiger. Tom would work with Benson a few years later on Harry and Son. 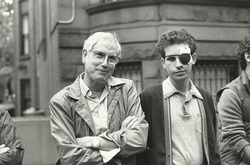 Barry Miller played the son of a more liberal Jew, a professor played by Maximilian Schell. He had more edges than the character played by Benson, and he was edgier in real life as well. On the first day of production, Tom introduced himself to the young actor, who said, with more chastisement than sympathy, "Don't you know how little respect people have for you?" He was, or course, referring to the position, not the person. Later on, he changed his tune a bit and thereby gave Tom the title of his Fever of the Mad chapter about what being a unit publicist entails: "What's a nice person like you doing in a job like this?"

And no, the patch is not because Tom slugged him. He liked young Miller enormously. 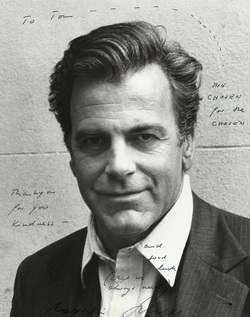 The screenplay is based on the Chaim Potok 1967 novel and involves two Jewish kids in 1944 who become friends in spite of the philosophic differences that separate their fathers on matters including the formation of the state of Israel. Tom was delighted to have the opportuinity to work with seasoned actors such as Maximilian Schell, the liberal professor . . . 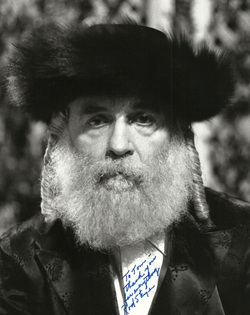 . . . and Rod Steiger, playing the conservative rabbi. As always his practive, Tom was totality familiar with their work before he ever met them. They both appreciated that. 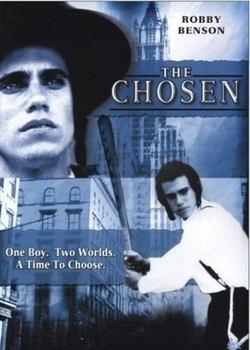 A few months after the big Radio City extravaganza, the movie was given a more normal release in theaters. It was generally well received by critics and audiences. I found it a worthy film, and in fact I think it is time to take a look at it again.