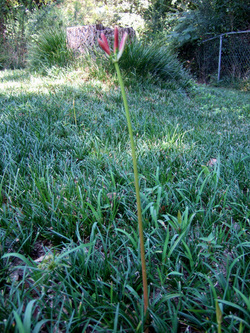 Finally a very few spider lily spikes have shot up out of the ground. They weren't there yesterday. We did have 2/10ths of rain Monday afternoon: maybe that gave them the impetus to leap out into view.

I discovered these after lunch with my sister and a cousin at the Pie Lab (I had the grilled chicken salad and a slice of coconut cream pie: good). When I got home I went on walkabout to decide whether and what yard work would call out to me. I made note of several things, but an attack of dripping and sneezing made me decide to postpone until tomorrow.  This is as good a place as any to remark that I have had a runny nose ever since my big allergy attack on Easter Sunday afternoon. When I was taking nasal sprays during my subsequent period of deafness, I thought the dripping was encouraged by the medications. When it continued, I have begun to think that maybe it results from unexpected plant growth further north than we are used to. Or not.

September 19: my first spider lily in full bloom! And more coming.
On the bank beside the county road the morning glories are doing their thing. You have to get out there early in the morning dew to get pictures of them. They close up pretty quickly after the sun hits them.
It was relatively easy to hobble down the hill to check on the spider lilies. Coming back up the hill posed more of a problem. Usually the yard is filled with yellow butterflies at the time the spider lilies are blooming. So far not many butterflies this year. I'd like to capture a shot of one on a spider lily, but so far not a single one has let me get close enough.
September 26. I've had lunch, light as I promised myself after yesterday's indulgences. Not only the big Pie Lab lunch but supper at Here Kitty Kitty with 2 favorite cousins. Fried everything, except for the salad and the coleslaw. Think of where the lesser characters in Deliverance would have gone for fine dining. Anyway, I looked out, and when I saw that the sunny morning had turned to clouds, I decided I'd better go out and capture a few more shots, Just In Case! Cloudy weekend forecast with a stormy Sunday! 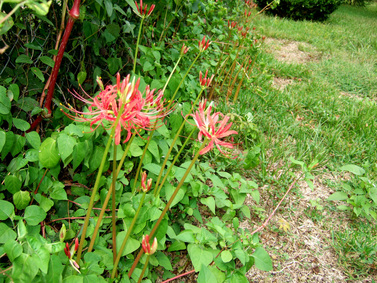 This row of spider lilies is just inside the fence to the west of the house. I had wondered when, even if, these would show up this year. Maybe those four o'clocks had crowded them out. But look what happened overnight! All of these spikes and the few blooms just suddenly appeared. None of them were showing yesterday.

Along with spider lilies we also have spiders. Great big garden spiders that spin webs between bushes exactly where you are tempted to walk. It is disconcerting to walk suddenly into one of these webs. As a child that would throw me into serious panic. The horror! Now it is more of just shock and irritation that I had not been more careful. I still don't like the feel of spiderweb on my flesh. Back in the days when I would accompany Huckleberry or Roscoe on their evening walks through the yard at night, I'd always hold a "spider stick" out in front of me to run into the webs before I did. Sometimes I think it a habit worth resuming, even in the daytime.

It will be interesting to see what the weekend storms do to the goldenrod and the spider lilies. Will they be beaten down? Or will they be encouraged to new heights? To be continued. 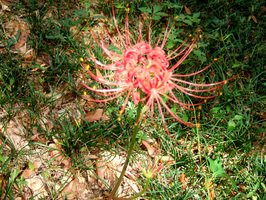 September 27. The month is rapidly moving toward the end. Looking out the office window a few minutes ago, I came to the realization that chances are I will not have as many spider lilies in bloom again at one time this fall, and I decided that I should try to document something of the number now in bloom.

The sky has been doing variations on this all day, getting ready for tomorrow's promised rains. There is actually the possibility of a day and a half fr steady rain. We could use it.
This morning I decided to show you the views looking out of my house this time of year. On the left, out the kitchen window. On the right, out the office window. Of course the screen has muddied them up a bit.