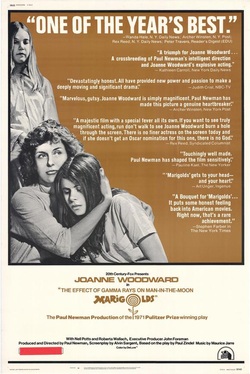 THE EFFECT OF GAMMA RAYS ON MAN-IN-THE-MOON MARIGOLDS, 197

Tom worked for 3 weeks on Gamma Rays in the spring of 1972. He felt terrible. He didn’t know it yet, but he had picked up a case of giardiasis in Mexico while working on The Wrath of God. (He’d been careful to drink bottled water, but he forgot that ice might not be made from bottled water.) Paul Newman directed, his wife Joanne Woodward starred.  She told Tom that gradually she had come to hate the role and the look of the character.

Tom arrived on set on a Monday morning with his usual satchel in hand. Director and star were busy, and publicist made himself at home, speaking from time to time to members of the crew. Woodward told him later, “We didn’t know who you were. We thought you might be the local pusher.” 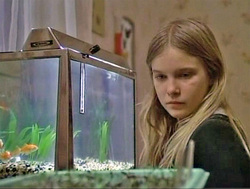 Tom’s job on this film, as well as several others over the years, was to gather material for later use and to run interference with press wanting access to location. (Later on that was his assignment of The Cotton Club as well, but nobody could keep a lid on that one. Take a look at A Fever of the Mad for details and gossip.) Both Newman and Woodward were pleased with how Tom handled himself and the press and with the material he produced.

Their daughter, billed as Nell Potts, played Woodward’s daughter in the movie. Tom became quite fond of her, and apparently she of him. Tom had a bunch of nieces, so he was used to getting along with young girls. I believe, as did Tom, that his friendship with their daughter helped in his relationship with her parents. 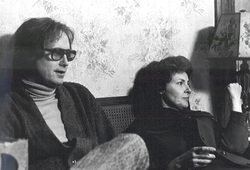 On set, directors tend to be busy. Actors have more downtime Tom and Woodward found much to chatter quietly about in the corner, to the extent that Newman once became annoyed and shouted out, “Get a room!” 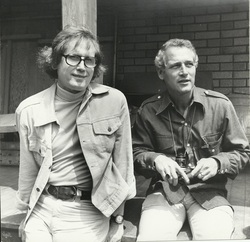 Woodward having more downtime, she and Tom were able to bond on set. Newman, as director, was constantly busy, but gradually a strong bond developed between him and Tom. After the picture finished, he asked Tom out to their Connecticut house for Sunday lunch. Tom made it, but only to discover that Newman had failed to inform Woodward, and he himself was busy in the front yard doing a commercial for McGovern. Tom went through his “Oh, you’re busy!” routine and said he’d head back. Woodward insisted on making Tom an omelet (using eggs produced by their pet chicken, in fact). She was going into town later to attend a New York City Ballet matinee and invited Tom to ride back with her, which he did. Before they left, Newman mentioned that Woodward would be away working for a while and invited Tom to come out to stay with him a few days and play tennis (Tom couldn’t play tennis but was willing to learn). The invitation remained teasingly non-specific, and nothing came of it.

In mid-June Tom and I drove out to Montauk for a quiet weekend. Very quiet, it turned out. Rained most of the time, and Tom was still suffering from the not yet diagnosed giardiasis. We drove back to town on Sunday June 18. We had tickets for the closing night of NYCB’s great Stravinsky Festival. At the last intermission, we ran into Woodward and Newman in the lobby and chatted the whole time, Tom and Paul talking shop, Jonathan and Joanne talking ballet. Gradually I became aware of something fascinating: there was a 12-foot diameter circle in which the 4 of us were the center and sophisticated ballet-goers were circling around us at just that distance, carefully noticing and pretending not to. I’m sure the 2 stars were recognized. I can’t imagine what they thought of Tom and me. But it was a fun moment. 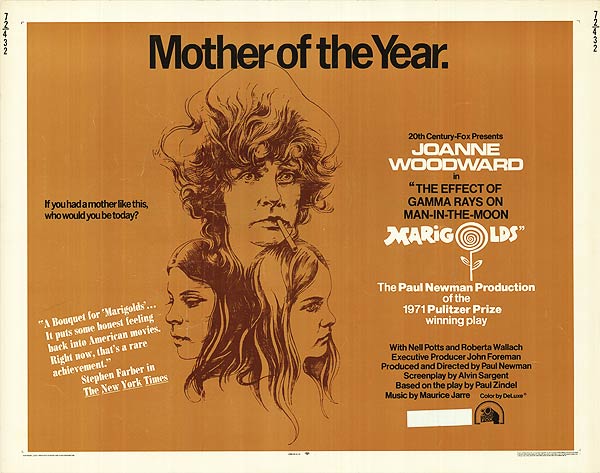