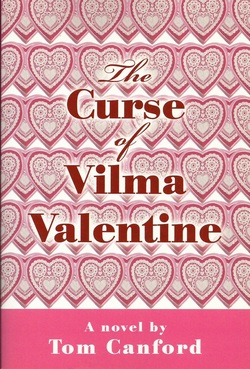 Adored by some, abhorred by others, actress Vilma Valentine is presumed dead after a fiery automobile collision in Mexico, her body never recovered. In the intervening years the fabled star is sighted more often than Bigfoot. Is it her ghost that crashes a party for Ronald Reagan in Juarez, appears at the deathbed of her estranged father in Rome, flees from Marion Davies and William Randolph Hearst at the Parthenon?
In 1969 Virginia Dofstader wins the Valentine lookalike contest publicizing The Curse of Vilma Valentine by literary heavyweight Gerald Carstairs. In the course of the book’s promotion, it is discovered that Virginia’s mother looks even more like Vilma than Miss Dofstader does.
As notorious in death as in life, Vilma haunts the imagination of aficionados of 1940s movies. Did she really kill all those husbands? Was she a Nazi spy? Was she truly responsible for the bombing of Pearl Harbor?
Her story, a suspenseful stew of WWII saboteurs, stolen European artworks, murders and massacres, is told in the words of major Hollywood figures—lovers, friends, enemies, and Vilma herself. It’s all seasoned with a knowing dose of romantic comedy.