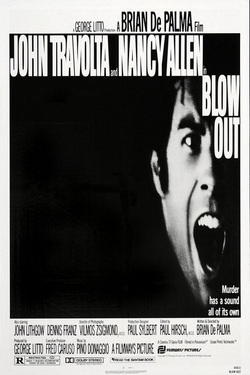 Tom's second Philadelphia-based movie (after Mikey and Nicky)  was Blow Out. He and I had admired Brian De Palma way back in the days when more sensitive souls seemed to want to trash him. It was no surprise to us that this film was well-received by critics. Although it did reasonably well at the box-office, it seemed to have trouble finding the larger audience that it deserved. 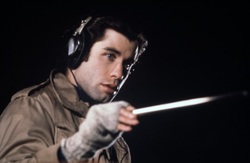 It is possible that audiences still wanted to see John Travolta like he had been in Saturday Night Fever and Urban Cowboy. They had not gotten used to the grungier look he tended to have in his later movies.

The shooting of John Lennon on December 8, 1980, occurred while Blow Out was in production. Since the movie dealt with assassination, there was some concern as to how that terrible event would affect opinion and audiences. Travolta was particularly alarmed. Like many other celebrities at the time, he feared the possibility of something of like nature happening to him. Tom reported that access to him was severely curtailed beginning immediately after Lennon's murder had occurred. 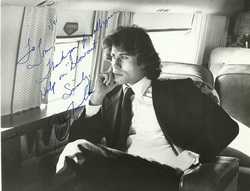 Tom liked Travolta well enough, and he thought the feeling was reciprocated. Travolta did invite him to come to California and be flown about in Travolta's plane. He did have a pilot's license. Tom, however, elected not to pursue the matter.

He did like director De Palma and co-star Nancy Allen (shown here with Travolta). But the people he really loved being with most were John Lithgow, playing a Really Bad Villain) and brilliant cinematographer Vilmos Zsigmond. Heaven's Gate opened for its curtailed (stupid, that. The curtailment, I mean) New York run. Tom and I saw that at a Saturday matinee and Zsigmond was to see it that evening. Had United Artists and Michael Cimino not panicked and pulled after Vincent Canby's incredibly negative review, the film would have lost a lot  less money and I am convinced Zsigmond would have won an Oscar for cinematography. He did fine work on Blow Out as well. Certainly this was one of the better movies in Tom's career.