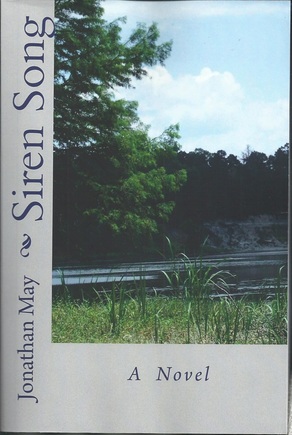 NOTE: This 2016 edition has new cover, re-written first paragraph, and new format for Anne's poem on page 85 of the hardcopy. Except for minor corrections, the text is otherwise the same as the earlier version with the green cover.

Luke and Anne Magnum move to his late Uncle Bart’s great house on the Black
Warrior River in western Alabama after the death of their son Paul from AIDS. They are joined by their son’s surviving lover, Rob Macon, find themselves involved in a series of
ghostly and sensual hauntings that Luke senses might be related to the old tale
he had heard about a strange river creature captured in the town of Erie in the
1830s that led to the demise of that town. Before he can solve the mystery, he
and his loved ones find themselves embroiled in a sensual phantasmagoria
involving the living and the dead. Reading the journals of Bartholomew Magnum,
they begin to sense something of what fate may have in store for them. But the
truth is even stranger. . . And something deadly is approaching from downriver.


* * *
I began this novel, my first, as an attempt to deal with grief and loss and the passing of time. I had moved home to Alabama, my parents had recently died just over a month apart, my companion of some 22 years (a good bit older than I) was starting to show signs of aging, we had taken in a puppy who would age at a different rate.  I knew there was more time behind me than before me. AIDS had encroached on my circle of friends in New York, its dramatic appearance on the stage shocking many out of the more carefree approach to the sexual freedoms of the 1960s and 1970s. All of this churned in my mind and imagination and demanded to be confronted. Attempting to deal with it in fiction seemed a good way to confront the demons obliquely, to engage them in a more controlled environment. I have ventured to friends, "It was a way to exercise my grieving muscles before I needed them." If in no other way, the novel has for me been a great success.

The present time of Siren Song is the late 1980s. As will become evident to readers, it could have been set in no other time and still be the same work. Oddly enough, it was great fun to write. Yes, I shed some tears, not at what I had written but at the thoughts and emotions behind that. It was a challenge, the work probably more complicated than a first novelist should attempt. I worked and reworked, submitted and resubmitted, to agents, publishers, contests. One positive response from a woman at the Harold Matson Agency suggested that the framing material should be dropped and only Uncle Bart's journal, the long central section, retained and expanded. Tried it, didn't work. The central gem needed its ring to set it off. Even more encouraging was an editor at St. Martin's Press, who praised the quality of the writing and was impressed with the handling of intricate and complicated sexual material. But nobody wanted to take a gamble on it. Eventually I elected to publish it myself.

I believe that part of the problem readers had with it was that it does not fall neatly into established genres. Where would you stick it in a bookstore? One way of looking at it: a mainstream novel with elements drawn from fantasy, science fiction, historical fiction, Gothic romance, and horror. (I like a good stew when the flavors work together, and I think they do. Feel free to disagree.) Another and perhaps simpler way: a science fiction novel in Gothic romance drag. Or maybe just call it a fantasy. (Could I get away with phantasmagoria as a genre?)

From my Afterword: Erie did exist, and it was in fact the county seat of Greene County, Alabama, from about 1820 until the county seat was moved to Eutaw in 1838. Thereafter the town did decline, as it does in Siren Song; and after 1850 it no longer
appears on maps of the state of Alabama.
The tale of the people of Erie capturing a strange being from the Black Warrior River also exists, and the tale does link the creature’s capture with the decline and eventual disappearance of the town. The author does admit to some embellishments to the story as it was told to him when it suits his purpose.
What was this creature? Siren Song explores one possibility. While the author cannot say how accurate his description of the creature and its kind might be, he can state unequivocally that Magnum House, the people who lived there, and their friends exist only in his imagination. He has taken a number of liberties with the geography of the area, and for that he makes no apology.

Concerning Magnum House: Several readers are convinced that they have actually visited the model of the big house on the bluff over the Black Warrior River. No, they haven’t. It is a total invention of mine with inspiration from several sources.  I wanted something different from the usual two-story Southern mansion with columns.  With grandfather Lucas Magnum in the lumber business, it seem reasonable for him to construct a house out of logs cut on the property. His taking a wife from London suggested a European model, and the old royal hunting lodges sprang to mind. A standard feature of houses in the South was the dogtrot, or breezeway, running down the center, and I simply made that much wider and taller to provide for a second level of rooms and the walkway on three sides that looks down onto the main floor. The old “raised cottage” construction that was a major alternative to the mansion with columns in the Old South gave me the idea of the lower level of the house: my own childhood experience with such was primarily with Umbria Plantation just up the road from my home. (For more on that plantation, click on “The Ghosts of Sawyerville” under the PLACES tab at the top.) An old historic house in Heiberger, Alabama suggested to me the wrap-around veranda, but other than that and the presence of a dogtrot down the center, there is no resemblance.

Obviously there have been modifications to the house over the century before the “present time” of the story: showers, electricity, indoor plumbing. It struck me as unnecessary, a waste of my time and the reader’s, to document those changes once I had described the construction of the house and its present state.

Listen, if the house actually existed and belonged to my family, I would have tried to move into it by now!