SUMMER Part 2: CREPE MYRTLE
And here it is peeking around the southwest corner of the garage, seeking the sun. They love the sun. If they get plenty of sun and sufficient water, they can flourish in the most inauspicious places. 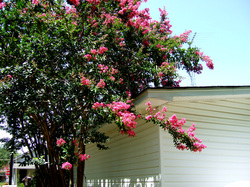 These 2 do well  on the narrow space between the west side of my garage and the county road. Look how they yearn toward the east to get the morning sun. Noonday and afternoon sun too is abundant, although about midafternoon the trees across the road start to shade them on the west. 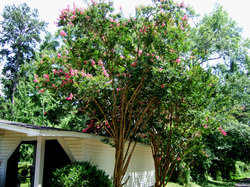 The roof slants all the way from the peak of the house across the patio and the garage. When it rains, a lot of water comes down that roof and spills over onto the crepe myrtles.


Let's take time here to gorge ourselves (more or less chronologically) on those by the garage:

In the middle picture, note how the more nearly barren bush leans fairly dramatically toward the west. This crepe myrtle never bloomed when I was a child, although the one further up the hill always had blooms. Then suddenly, about 7 years ago, it began to bloom. I think that finally it had  grown tall enough and was able to lean westerly enough to get just that little extra bit of sunshine it needed to bloom.  It does now bloom a bit, but only at the very top. The picture on the right is a reverse angle shot taken from the edge of the patio. That bush just outside the rear bedroom window  was planted much to close to the house. Every few years I have to get out the chainsaw and cut a trunk or so that have become too close and have started to rub against the edge of my roof. As you see, the cannas are still blooming, and in the distance a couple of lingering day lilies. 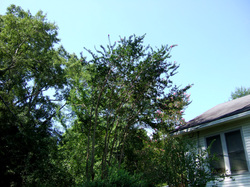 Here's a good portrayal of just how much that one plant does lean to the west.

Those leaning oaks you see on the left are down in my woods. They too are trying to get as much sun as possible. 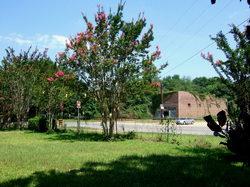 The row along the front fence tend to be late bloomers. One of these days soon they may be more spectacular than they appear now. If so, I'll grab a couple of shots. The one just to the left of the center plant, just to the right of the front walk, I planted myself perhaps 8 years ago. It's smaller and hasn't produced much in the way of bloom over the years. 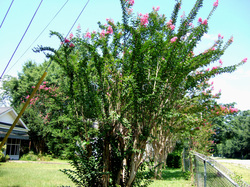 Earlier I said I didn't cut back my crepe myrtles. This easternmost one along the front fence is the exception. It is directly underneath the main telephone line to the house. I think it wise to keep it cut several feet from that line. Actually the line wasn't there when I planted the bush. It ran from the pole to the right of this bush to the front edge of the store porch, down the east side of the store roof, and over to the house near the chimney. That arrangement dated back to when we were first on a 4-party line, the house and the store phones being 2 of those parties. I'm certainly glad I had this changed before the log truck took out the store porch in late 2007! 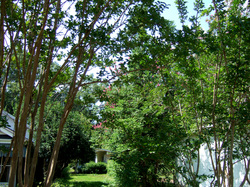 Looking south from outside the west side of the front yard. The smaller crepe myrtle on the right grew from the roots of the bush that was demolished by the car wreck in late summer of 2008. It hasn't done much in the way of blooming just yet.  Actually I tried to get extra money from the insurance company (theirs, not mine!) for value added by age (some 70 years) of the destroyed bush. Not successful. I could only get the amount estimated for purchase and planting of a new bush. Oh, well. 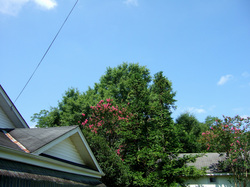 The bush to the front left of the porch and rear right of the store is still fairly spectacular, but it too is starting to lose its edge. As do we all as time wears on. 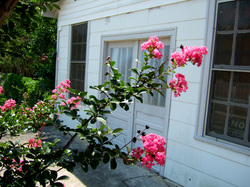 The front of the store as it looks today. Double doors to permit more air to get in during pre-airconditioned summers. Those windows would be open too. Front and back. Only the single door in the back, but that still helped with gathering in what breeze might come. A large fan suspended from the ceiling behind that far window helped matters a bit as well. And yes, flies did come in with the breeze. Sticky fly tape in coils hanging from the ceiling would catch some, and the rest we'd whack with flyswatters. And of course you'd have your own hand fan carrying the name of some funeral home to fan your face with.

But I'm getting somewhat off topic. Let me leave you with these 3 final images and shut up for a while.