The altheas are starting to bloom. The plants spring up like weeds, and I am constantly (well, in the summertime when I'm out with clippers) cutting down the ones that pop up where I don't want them. They come in white as well as various shades of purple, but for some reason most of mine are purple. 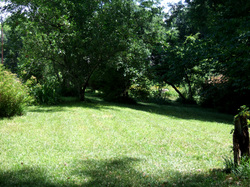 Let me brag again about how hard I've been working lately. Mowing these hillsides when it is 90 degrees and muggy is a task and then some.

I see a few sprigs I missed. Not to worry. There's always next time. 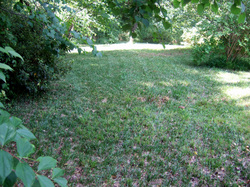 Reverse angle, sort of, although I'm further down the hill. (I must tell you that I first typed that as "reverse angel," which strikes me as oddly poetic.)

On Sunday afternoon I did a lot more thinning out and removing unwanted plants from that line of azaleas on the left. Lots more to do. Possibly this afternoon. 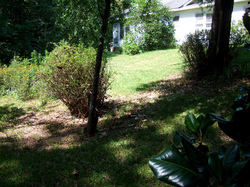 I don't usually try to mow both rear and middle hillsides in one day, but yesterday I did. I even managed to mow around the magnolia on the front hillside. Hillside mowing does seem to hurt my back (all that walking back and forth at an angle), and last night I did feel the effects from it.

I do think I will remain happy with the loss of that flowering quince between the two bridal wreaths. There was simply too much shade at this spot. 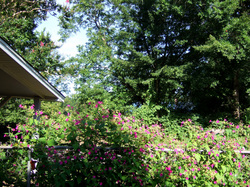 The Black-Eyed Susans have pretty much run their course now, as you probably can tell from the shot above. The four-o'clocks, on the other hand, show no signs of stopping. Each of those blooms will produce a large black seed (when they do, I'll see if I can photograph that stage). After supper last night Cousin Billy and his wife dropped by to deliver largess from their garden (yellow squash, zucchini, green peppers, cherry tomatoes), and we sat on the patio awhile chatting about family and smelling the four-o'clocks. I've promised to save some of the seeds for them.
This time of year, when most of the blooming flowers (except for those crepe myrtles) have slowed down considerably, I can usually count on the usual afternoon and evening storm clouds for a bit of visual excitement: 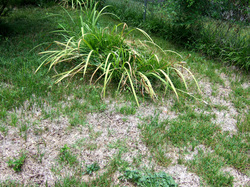 July 14. If you ask me, Dog Days have arrived. According to John Brady’s Clavis Calendaria, or a Compendious Analysis of the Calendar: illustrated with ecclesiastical, historical, and classical anecdotes, during this time "the Sea boiled, the Wine turned sour, Dogs grew mad, and all other creatures became languid; causing to man, among other diseases, burning fevers, hysterics, and phrensies."  Yes, I can believe that. 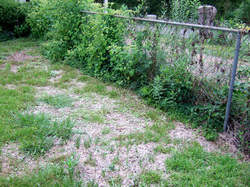 I know that historically Dog Days are associated with Sirius, the Dog Star. Yes, I know that historically it should last 40 days and nights (as so much did once upon a time). In my mind, it begins on or about July 4 and continues until mid-September. (Some of my kin would push that start date back to late May, and I must admit some of those hot muggy May days can be killers.) Bird calls diminish during this time. Their territories have been established. Their families are, for the most part, out of their nests. They’ve got nothing to sing about, so they shut up. The sudden absence of bird song can be quite dramatic. 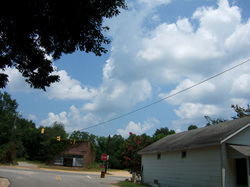 Dogs grow mad. Certainly we believed that when I was a child. Parents would gather in their children if a strange dog, or a known dog acting strangely, was spotted running through Downtown Sawyerville. Rabies was a great fear (as it should be). Kids would shudder to hear that you had to have a shot in your stomach! I imagine most of these dogs were not rabid at all. Just hot and tired and worn out by summer like the rest of us. 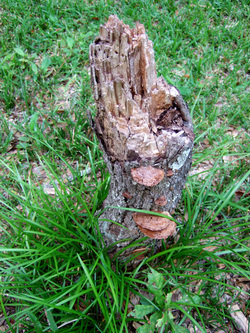 Fellow Southerner William Faulkner knew the effects of the long Southern summer. His short story “Dry September” begins, “Through the bloody September twilight, aftermath of sixty-two rainless days, it had gone like a fire in dry grass—the rumor, the story, whatever it was.” Later he describes a small town street at night where “. . . sparse lights, insect-swirled, glared in rigid and violent suspension in the lifeless air.” Faulkner knew that Southern summers could lead to “hysterics and phrensies."

The longest days of summer, of course, are on or about the 21st of June. Before Independence Day you notice that the days are starting to be shorter. You’d think that would make things cooler, but it doesn’t really. In fact, nights are often warmer, due in part no doubt to the fact that our houses and our surroundings have built up so much heat from the summer sun for so long.


For 8 of the next 10 days we are offered the prospect of isolated or scattered evening thunderstorms. You are more likely to get none, for your neighbors down the road may get the isolated shower, not you. What you will get is the humidity, but your yard will remain dry. That’s Southern summers for you: drought with high humidity.

And of course, there are sunsets for consolation.
Two days later. July 16, in fact. We had an inch and a quarter of rain on the evening of the 14th, and another inch and three-quarters late yesterday afternoon. Here's the sky not 10 minutes before yesterday's rain:
A wonderful summer day today. At 1:30, when I came into the house after my morning and after lunch mowing, the temperature was only 81 (lately it was well into the 90s by then), low humidity, a good breeze blowing.  I couldn't pass up the opportunity for yard work. And when I got around to the east side of the house this afternoon, I was greeted by a surprise.
After I took the pictures I mowed this area, getting close to but not damaging these flowers. (Actually, I got a lot of mowing done: in the front yard from the magnolia west to the walk, between the front fence and the highway, the side yards to the east and the west of the house, and the strip to the west of the store. Mainly I was trying to whack down the smut grass that also popped up after the rains.) Here are a few more shots of the, well, let's call them by their more sedate name, pink ladies: 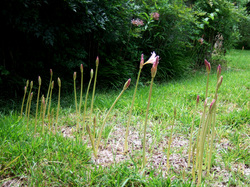 All the moisture this week really has the naked ladies popping out the the ground, although so far most of the blooms have been in the shadier areas, as you can see. I continue to be amazed at how fast these spikes emerge from the ground. 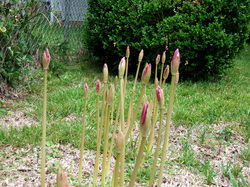 Of course, at this stage they could be referred to just as accurately as naked gentlemen.  Then again, the Southern gardener, usually a woman in the old days, didn't let her mind go that route. 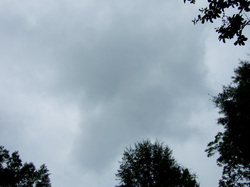 July 22. Two days later. With the sky looking like this mid-morning, I decided that if I wanted to get any mowing in today, I'd better hop to it. I went out to survey the yard to see what needed it most. The north hillside around the magnolia. A section of the back hillside. Then I noticed how well the naked ladies were doing. They're probably nearing their peak today, and if we have hard rain they will suffer from it. Better grab the camera and take a few shots before the mowing is underway. And so I did: 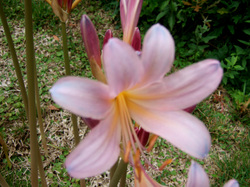 And this one too. It's a bit fuzzy, but it does show up the colors nicely.

These may be the last shots I get of naked ladies this year. Tomorrow I have to take my 97-year-old cousin to his cardiologist's in Tuscaloosa so that a technician can check out his pacemaker/fibrillator that was implanted a few weeks back. That afternoon and the next day we are threatened with (or should I say promised: we need the rain) with thunderstorms. And these naked ladies, well, once they start displaying their wares, they quickly start to fade. 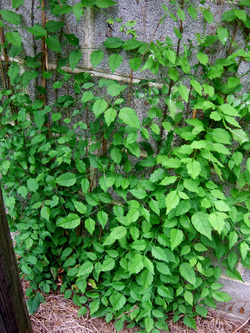 I don't know the name of this vine that grows up the side of my pump house. I like it a lot, but it has become a nuisance and I am now trying to eradicate it. Part of my ongoing attempt to simplify life in my yard.

Some of you have expressed concern over my mowing, particularly on the hillsides. Let me assure you that I am careful. I do pace myself. I no longer have the feeling that once I have the mower out I have to do the whole yard at one time so that it looks neat. I don't mind patchy. (Yes, you have noticed!)

And as with this vine, I continue to watch for ways to simplify as I am working. My big idea of the week is to let my "wildflower garden" increase in size to take over most of that particular hillside. I would continue to mow a two-yard width at the bottom of the hill along the fence as well as a good space at the top of the hill. I think it could work. I'll try it next year! 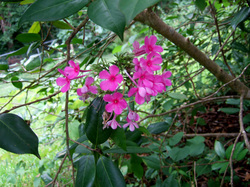 And it gave me so much pleasure this morning to find this pretty little thing shyly hiding within the purple dawn camellia bush. I don't know what it is called. But there it was. Just for me.
But the next afternoon, after I got home from Tuscaloosa, I couldn't resist a few more shots of the naked ladies. They are, of course, close kin to the amaryllis, and I believe these are the variety from the Orient instead of from South Africa. Lycoris squamigera  is the fancy name, and the less fancy names include resurrection lily and surprise lily. The earlier photos focused more on details of the plant, and I wanted these  to show more the relationship of the various stands in the yard to each other and to the house: 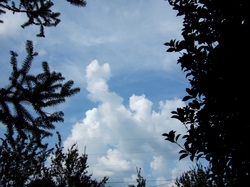 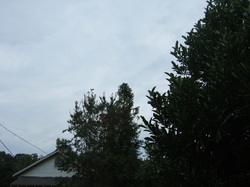 The last day of July. Overcast. That's probably the reason that I slept until 7:40 this morning. That and how hard I worked yesterday.

The last 2 days were wonderful for yard work. Much cooler, good breeze. I was sort of thinking about doing more this afternoon, but when I got home from lunch at the Pie Lab with a friend  and then a visit to kinfolks on the way back, I went out for a walkabout to see what most needed to be done and the humidity was so high that even with that amount of effort I was drenched with perspiration. Nothing so urgent that it can't be postponed. 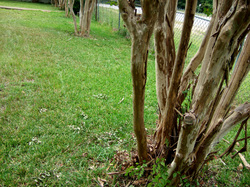 Yesterday morning I worked hard in the front yard cleaning the unwanted branches and vines and other trees and  bushes that have a habit of growing up within the crepe myrtle bushes. I ended up with 2 large wheelbarrows full of stuff I cleared out from the ones alongside the store inside the yard and along the front fence. 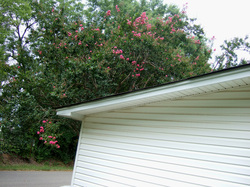 The crepe myrtles are way past their prime, as you can tell by these that overhang the garage.
You must have noted by now that I love crepe myrtles. I miss them when they are gone.

The naked ladies are turning brown: in a day or so I'll go out and crop those stalks down. It is interesting that this year for the first time I have truly enjoyed the naked ladies. Maybe posting them here has made me look at them afresh. 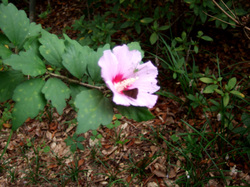 A few hungry insects are still trying to sip whatever sustenance they can out of what remains of the althea blooms. Still, although summer will remain for several more weeks, the time of summer flowers is drawing to an end.