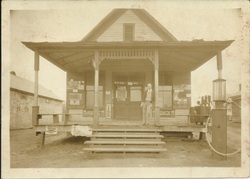 My father is standing in front of his older store, across the highway from the house in which I grew up and now live. To the left is the building that during early lifetime was the juke joint (we called it the Rock-ola) operated by Johnny Pickens,  the only black man who ran a business that faced the main highway.   This photograph probably dates from the 1920s, and it is possible that my father was still in the store business with his brothers (later on he got full title to that business when the brothers were settling their father's estate). I love the decorative woodwork above the front steps. 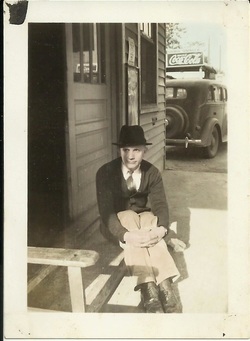 At some point in the late 1920s my maternal grandfather King David Turberville  built a house and new store for his daughter  and son-in-law across the highway. I'll bet this was the first photograph taken of him in front of his new store. In the background you will see the top of the old filling station that belonged to local resident George Springer.  Later on that property was bought by Warren Walton, and he built the house for his family in the large yard.  I have the vaguest memory of watching that filling station building being rolled across the highway on logs, but that may be a memory of having been told about it. That building stood near the highway across from my house for some years while I was growing up, used mainly for storage.


And below are photographs of Daddy in his new store. Judging from the cardigan, I'd assume they were taken the same day as this one. That building still stands, and now I use it for storage.  The shelves are still there and two of the massive counters. The display cases were sold.
How empty Sawyerville looks across the street. Behind that shot of my grandmother Pearl and me, on the far left is M..T. Martin's brick store, and to the right of that the  Johnny Pickens's  establishment. Just to my right in that shot you can see the old grist mill operated by George Springer, powered by a gasoline generator housed in that old store to its right.  On the far right is the building, formerly a store, that during my early years was a black church.  (That's my mother and me on the tricycle, my Aunt Louise, her baby sister, with me on the front walk.)
And then we skip to the 1970s.  Life  had gone of. I had gone to college and then to New York. Pictures were taken, but for the most part they didn't show Sawyerville.  And Sawyerville itself was drying up on the vine. It was a thriving community during the war, but afterwards, as more people could afford cars, they'd continue on to Greensboro or Eutaw for shopping  instead of stopping locally. The trains stopped running, the depot was torn down (ho I wish I had a photograph of that old building), and the iron tracks taken up.  Here it is, I believe, 1972, and Tom and Jonathan are sitting on the rear of Walton's Store. That road beside what was the train track used to be the main road through town, but that was shifted a block south early in my lifetime. In early days this was the front of Walton's Store, not the rear.  Jonathan is standing in front of the store you see in the background in the second picture. Tom is standing beside it, and in the background is the rear of the Pickens' establishment and, to the right, the rear of the brick store. In that far left photo, between Tom and Jonathan across the railroad tracks was where Isom Mosely's blacksmith shop had stood, a major fixture and destination for Sawyerville boys in the 1940s. More cars meant fewer horses and mules to be shod and wagon wheels needing repair, and it vanished early on.
Downtown Sawyerville, probably 1973. Dusk. After a shower. It is no longer J. B. May's store, but my mother's. She continued the business for a few years after he retired as postmaster and later as country store owner. The front of that store was knocked  off by a log truck in December 2007, just after Tom's death. Uncle Murrray's tin store still stands (he married my mother's middle sister) but by now he had bough the brick store and ran his business there.