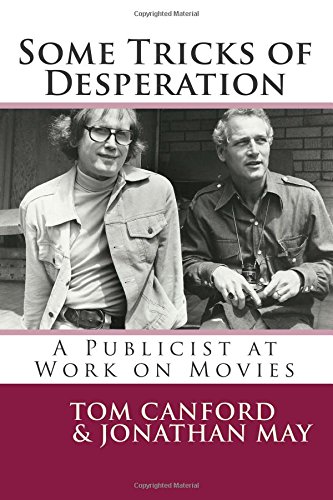 
Movie publicist Tom Miller (who used the name Canford for his writings) had before his death written a memoir, A Fever of the Mad, about his experiences working on the troubled production of Elaine May’s Mikey and Nicky and Francis Coppola’s The Cotton Club, that manuscript edited and published by his surviving friend Jonathan May. In later years May wrote down his memories of what he had been told by Tom of his experience on other movies, and with the tales having first come from the publicist himself, he decided it only appropriate to list Canford as first author. Movies discussed include the original Shaft, Ryan’s Daughter, Blow Out, The Gang that Couldn’t Shoot Straight, The Wrath of God, The Last American Hero, and two directed by Paul Newman. Actors encountered include Robert Mitchum, Rita Hayworth on the last film she completed, Jeff Bridges, Frank Langella, Joanne Woodward, Bruce Dern, Donald Sutherland, John Travolta, and Lynn Redgrave.